We use cookies to make your experience better. To comply with the new e-Privacy directive, we need to ask for your consent to set the cookies. Learn more.

In 2016, the University of Cambridge released a tender to replace two BMM Weston autoclaves that took up a large amount of space in two separate rooms. In 2017, Triple Red were awarded the contract for the removal of these autoclaves and to replace them with two state-of-the-art Systec HX-540 autoclaves in the space where just one autoclave occupied previously.

Energy efficiency and environmental impact were two major concerns for the university. Autoclaves are notorious for wasting energy, generating a massive amount of heat that leaks into the room, making them uncomfortable to work in and requiring large heat extractors. But not with Triple Red autoclaves manufactured by Systec. Systec are the only autoclave manufacturer in the world to attain ISO 14001:2015, meaning Systec make continued improvements to reduce their environmental impact. For instance, our autoclaves are fully insulated internally with high-efficiency Hanno-Tect insulation. This greatly reduces heat loss from the machines, meaning the room is now comfortable to work in, the air extractor could be decommissioned and the university can save massively on its electricity bill. In addition, all Systec autoclaves feature a round chamber which is far better suited to a pressurised environment, requiring typically 2.5x less steel than square-chambers, and thus typically 2.5x less energy to heat up.

Reliability and longevity were also important factors to the university. This is why all autoclaves supplied by Triple Red are designed to be fed by RO water to create ‘clean steam’.

RO water helps to prevent scaling of the integral steam generators far better than softened or tap water, helping to prolong the lifetime of the autoclave and reduce costs. It also means no residue is left behind on the user’s loads such as glassware which could otherwise affect users’ experiments. Triple Red are also specialists in water purification, and were able to provide an energy efficient, standalone RO water system manufactured by ourselves to feed the autoclaves, creating a complete all-in-one package for the university.

Speed and efficiency was also a necessity to the university. This is why they opted to have state-of-the-art cooling options to decrease their cooling times by as much as 90%! This was achieved by adding multiple cooling options that work together – a cooling coil supported by a radial ventilator and ultracooler heat exchanger. Importantly this cooling is performed under pressure, preventing evaporation of liquids (so concentrations of media loads remain the same), preventing boil-overs and preventing glass explosions, creating a safer environment for the users. Efficiency was also increased by adding a rack with adjustable shelving to make the most of all the space available and a sliding shelf, enabling ease of loading the autoclave by sliding the shelf or rack directly from a trolley.

Drying can also be a particular issue in autoclaves, particularly plastics and glassware. This is why the university opted for our Superdry function. By combining a pulsed post-vacuum and maintaining the temperature inside the chamber, the boiling point of water is reduced, enabling the remaining liquid to evaporate more easily and be removed from the chamber. This also saved the university from having to use external drying cabinets, further reducing the university’s environmental impact.

All together this enabled the university to maximise the amount they could autoclave per day using the minimal space possible, whilst greatly reducing their environmental impact and creating a safer and more comfortable user environment. 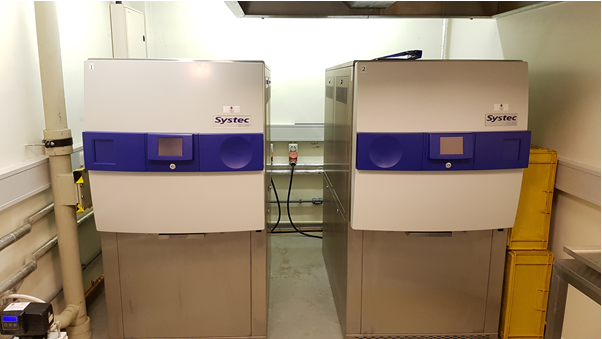